I’ve always been a great fan of dystopian fiction – nightmarish visions of where our society is heading. I started reading them in my teens – well before the year 1984 – and still read them, and watch the various film and TV versions with great interest. So do many people. I do wonder, however, whether our current government has been reading and watching them rather too much – and rather misunderstood the point. In many ways, their recent policies and practices seem to be moving towards making them a reality. The trouble is, they don’t seem to have quite decided which of the dystopian visions they prefer – and may indeed be heading for a mish-mash of them all!

The first and perhaps best known of the dystopian visions the government appears to be emulating is George Orwell’s 1984. Indeed, had the government of Big Brother had the facilities which the government is attempting to bring in with its Communications Data Bill (about which I’ve blogged many times – e.g. here), it would have been ecstatic. 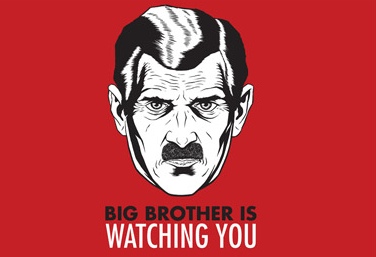 Through the systems envisaged in the Communications Data Bill, the current government can get surveillance of our every action on the internet, our every phone call, our movements (through the geo-location data on our mobile phones), who and what we like, our taste in music, even the books we read if we use Kindles or iPads. It can use this data and the sophisticated profiling techniques developed by the internet industry to develop detailed pictures of pretty much every aspect of our lives. With the Communications Data Bill, Big Brother is more than just watching you….

Aldous Huxley’s Brave New World was always my ‘favourite’ dystopia – and in lots of ways I suspect his nightmare visions are closer to reality than Orwell’s 1984. It envisages in some ways a ‘softer’, more subtle form of control – a world where consumption is the primary motivation for everything, and where people are directed to consume exactly what they’re told.

The consumerism is something that the current government – and indeed most previous governments in this country – would immediately recognise, but there are other elements which match our government’s vision. The first is the mantra of ‘choice’. In Brave New World, everyone thinks they have choice – to play Electromagnetic Golf or Escalator Squash or Centrifugal Bumble-Puppy. Lots of ‘choice’, but all those choices meaningless, and designed to manipulate people into doing what’s to the benefit of the elite. Ring any bells? 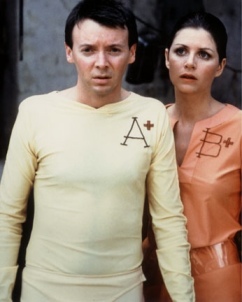 There’s another element that might ring some bells: the society in Brave New World is strictly class based – you’re given your class at birth, and that determines everything. Each class is carefully conditioned to know their place, and it’s the Alpha plusses who rule… We may not have sleep-teaching in today’s society  – though Michael Gove might well approve if we did. And when Andrew Mitchell was accused of having told some police officers to know their place, it wasn’t so much the actual words that rang true but the way that they fitted with the image that many people had of the government….

Kafka’s The Trial is a very different kind of dystopia, but one that also seems to be having echoes for this current government: 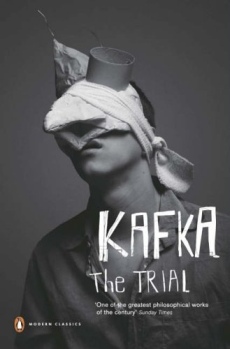 There are many deeply disturbing aspects to The Trial, but the one that has the most direct echoes today is the idea of a secret trial, where no-one really knows what’s happening and why. In liberal societies, justice is supposed not only to be done but to be seen to be done – and due process is supposed to be something that we can follow and we can rely upon – if trials are secret, unaccountable and invisible, that is lost…. and yet that is the essence of some of the proposals currently being put forward by the government in the Justice and Security Bill (see here for a Q&A on it). Mind you, the whole system of ‘justice’ for ‘terror suspects’ of not only this government but its predecessor has had more than a touch of The Trial to it: people detained without charge, without trial, and with the evidence against them kept hidden…

The 1987 movie Robocop (to be remade in 2013/2014) portrayed a nation in financial crisis, people afraid of crime, and the overwhelming spectre of privatisation of police operations. 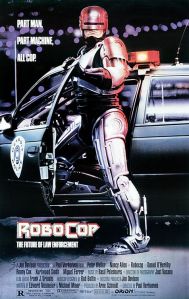 Most of that scenario fits very well today – with the likes of G4S in the role of OCP. With the newly elected Police and Crime Commissioners in place, the possibilities for selective ‘outsourcing’ of operations have increased significantly – and the opportunities for the profit motive overwhelming the need to ‘serve’ the public have similarly grown. Those opportunities are what underlie the dystopian nature of the society of Robocop…. and though we don’t (yet) have the technology of Robocop, the growing use of Tasers, of drones and so forth make it not that far from what we have seen.

Alan Moore’s seminal graphic novel, later turned into a film, seems to be the latest dystopian vision aimed for by the government of David Cameron. 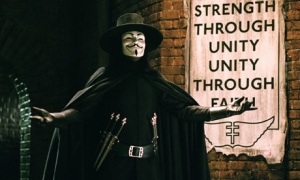 His latest vision – to restrict the use of judicial review, because it was ‘wasting time’ and getting in the way of economic growth – would be disturbing enough for anyone interested in due process, in accountability and in justice, but the language and imagery he used is perhaps even more disturbing. It’s in this imagery that the echoes of V for Vendetta come in. Cameron suggested that our current economic crisis is akin to being at war – and that as a consequence we should use similar ’emergency’ powers to those employed during the war.

“Normal rules were circumvented. Convention was thrown out… …Well, this country is in the economic equivalent of war today – and we need the same spirit. We need to forget about crossing every ‘t’ and dotting every ‘i’ – and we need to throw everything we’ve got at winning in this global race.”

It’s exactly this kind of evocation of ‘spirit’ that characterises the government in V for Vendetta – echoing the similar stories in 1984, a state of constant war. Allowing governments to circumvent normal rules, to avoid due process, is very often the start of a slippery slope of the worst possible kind. I might be accused of following Godwin’s Law by suggesting a similarity with pre-war Germany – except for the fact that Cameron himself brought Godwin’s Law into play by mentioning Hitler himself!

All the different elements of the dystopian vision seem to be coming into play together. We’ve got the consumerist, class-controlled society of Brave New World, the ever-present surveillance of 1984, the secret courts and hidden ‘justice’ of The Trial, the privatised and profit driven policing of Robocop, and all wrapped up in the hysterical and hyperbolic rhetoric of V for Vendetta. Which dystopia will Cameron choose? All of them, it seems….

11 thoughts on “Choose your dystopia…”