There’s been a great deal of fuss around the idea of Margaret Thatcher having a ‘Ceremonial Funeral’ at the public expense – an expense amounting to up to £10 million, apparently. Given the divisive nature of Thatcher as a Prime Minister, it seems particularly inappropriate – many people disliked Thatcher intensely, and to find that in a time of austerity their money is being spent on a funeral is particularly galling. 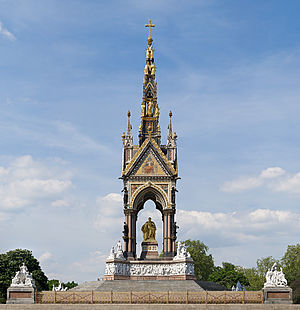 There is, however, another alternative – one that borrows from that era that Thatcher herself admired, the Victorian age. In those days, big events and memorials were often funded by ‘Public Subscription’. The Albert Memorial was funded that way – so why not do the same for Margaret Thatcher’s funeral?

Effectively this would be ask people if they wanted to contribute – and collecting those contributions. It worked very well in the Victorian era….

It could solve a lot of problems. Those who disliked Thatcher won’t feel that their money is being wasted. Those who loved her can show that love – there could be a memorial list of people who contributed to the funeral, showing everything publicly. And, at the same time, it could save the public purse money. I’m sure those people who loved and admired Thatcher could raise the money relatively easily – so why not?

They could even raise a permanent monument, if they would like.

7 thoughts on “Thatcher’s funeral – why not a ‘Public Subscription’?”