“Living standards continue to drop, forcing millions into poverty, yet the politicians remain addicted to austerity.

This demonstration will assemble right on the BBC’s doorstep and march to Parliament to demand that the alternative to austerity is no longer ignored. Join us.” 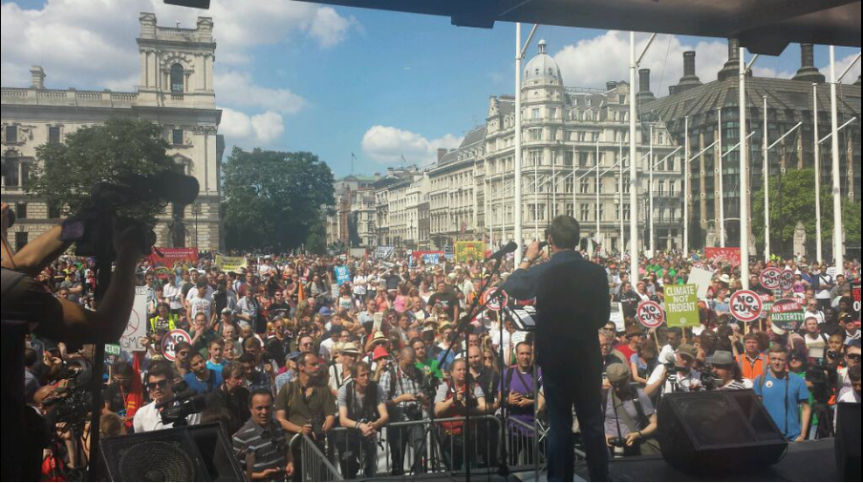 50,000 or more people did join them, including Russell Brand, Green MP Caroline Lucas and others. And yet the result, at least as far as the BBC was concerned, was that the protest, and the alternative to austerity, was ignored. On the day, the BBC gave it no coverage at all, to the fury of the protest organisers and the radical twittersphere. Eventually the BBC did put up a cursory mention of the protest on their website, including a very short video with no commentary, but nothing of note on either their radio or TV news or current affairs programmes, at least nationally. There was coverage on some overseas media outlets (e.g. RT, Al Jazeera), on local broadcasts (so I am told) and in some of the newspapers, but nothing on the mainstream BBC, ITV, Channels 4 or 5.

Why was this? Is it a kind of conspiracy of silence – a closing of ranks by the establishment against the ‘alternative’, instructions from above or similar? Or is it, as Willard Foxton, writing in the New Statesman, put it, that:

“…the sad truth is “Lefties march in moderate numbers, again, and then go home, again”, isn’t much of a story”

Foxton’s article is well argued and, as someone who has been on many, many marches from the late 70s onward can testify, his observation ‘…that insanity is doing the same thing over and over again and expecting different results’ certainly has some application here. And yet that too misses the point – because though the chances of a genuine conspiracy of silence are minimal, coverage of politics and news in the mainstream TV and radio stations in the UK is remarkable in its narrowness and insularity. The term ‘Westminster Bubble’ applies much more directly to the media than it does to the politicians, most of whom do at least spend a decent amount of time in their constituencies. I made a couple of flippant remarks using my  Nick Robinson Twitter parody account, @KipperNick, that seemed to resonate. 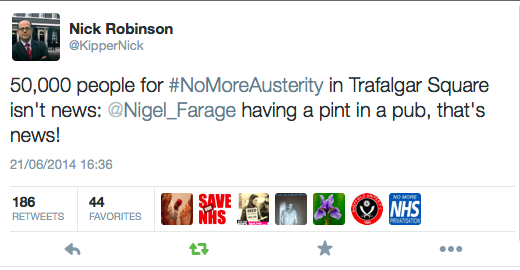 The point isn’t that there’s a conspiracy of silence or even a whiff of corruption here. I don’t believe either of those for a moment. The point is that the BBC, and their news and politics teams in particular, really do think that Nigel Farage in a pub is news, and protest marches aren’t news. They really believe that lefties marching in moderate numbers (and yes, in the BBC’s eyes 50,000 are moderate numbers) doesn’t constitute news – and, to be frank, I don’t think they’re necessarily wrong. Those kinds of numbers go to premier league football matches every week, and we wouldn’t call that news.

Where I would argue with the BBC is what, if protests aren’t considered news, the BBC and others do consider to be news. That’s where the @KipperNick tweets come in, and why, I suspect, they got so many RTs. The BBC has a role to play, and they have to understand their power – as anyone with even a cursory contact with that ‘Mickey Mouse’ subject ‘media studies’ should know, TV news plays a significant part not just in reporting but in setting the agenda.  Through the narrowness of their coverage – their obsession with UKIP and with Nigel Farage in particular is just one manifestation of this – they can have a significant impact on politics. They can also generate great dissatisfaction and exacerbate the feeling of disconnection that many people have with both the media and the political process.

The fact that Russell Brand was the key celebrity figure at the march on Saturday should have made the point – Brand’s Newsnight performance last year was largely about this disconnection. People, and young people in particular do not feel included in the debate or the decisions about what’s happening in this country. On the subject of austerity, there seems to be almost complete consensus amongst the mainstream political parties – certainly the Tories, Lib Dems and Labour seem wedded to it, and though UKIP have said very little it would be hard to imagine that, libertarians as they sometimes claim to be, they would do anything but embrace austerity if they were ever given the chance. It’s not even up for discussion – either by the politicians or the media.

So what can those (myself included) who do not believe austerity is the solution, actually do? Organise more protest marches that will inevitably be similarly ignored to Saturday’s? If 50,000 wouldn’t get media attention, would 100,000? 500,000? Perhaps. If the protests turned violent, or became riots, that would get media attention – but would do nothing to change the minds of those behind austerity. Quite the reverse. So what else can be done? The more ‘modern’ alternatives like online petitions etc are even more useless and more easily ignored – indeed, most of the time they seem like the best way to dissipate any energy there is behind change.

The truth is, I don’t know the answer – I wish I did.  I can understand why the BBC didn’t cover Saturday’s march – but I think they need to broaden their horizons and start looking beyond the Westminster Bubble and their increasingly tired and irrelevant political programmes. If they want – and they often claim to want – young people to be more engaged in politics, then they, as well as the protestors and campaigners, need to find new ways to do their job. In the end, I agree with Foxton that the protests were not really ‘news’ – but the movements behind them, and the debates that they’re trying to put forward are certainly, in my view, politically relevant.  How can these arguments make it onto the news and into the mainstream? That is a challenge for both the campaigners and for the media. Both need to show more imagination.

31 thoughts on “No more austerity: are protests ‘news’?”