I returned from a brief trip to Romania with distinctly mixed emotions. There was the pleasure of a great trip, seeing old friends, being treated with immense hospitality – and at the same time, as this was my first trip to Romania since the Brexit vote, a sense of profound sadness and what we, as a nation, have decided, and perhaps even more importantly why. I know the reasons for the referendum result are complex, and I know that my views will not be popular with some, but as I see it a very significant part of what lies behind the result is old-fashioned xenophobia. I mean that precisely: a fear or distrust of strangers or foreigners.

I have a long connection with Romania. My wife is Romanian, and I’ve been visiting regularly for well over a decade. There are all kinds of things I love about the country. The food is generous and fascinating – things like the way they serve pickled chillies and their own special sour cream with their soups to the great cheeses and cakes. Their folk tales, with scary dragon-like ‘zmeu’ and their scarier mothers, and even worse, the wonderfully named witch-like ‘zgripțuroaică’, are excellent. They have great cats too. This is Miți (‘Mitzi’). 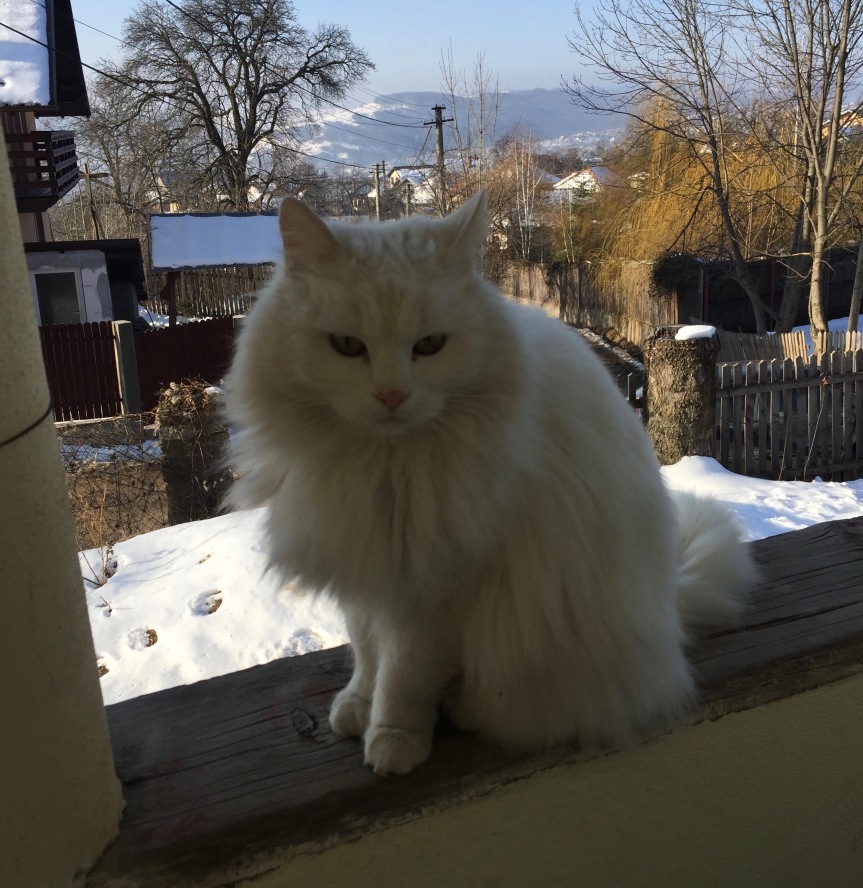 As for Romanian people, they’re great too – or rather, they’re just people. That’s really the point. There’s nothing to be especially scared of about Romanians – and they certainly don’t deserve the demonisation that they’ve been subjected to over the last few years, particularly by Nigel Farage, who amongst other things suggested that people should be scared if Romanians moved into their street, and memorably told James O’Brien that ‘you know the difference’ between Romanians and Farage’s own German wife and children.  The suggestion that Romanians are essentially cheats and criminals, people to fear, people to worry about, people that we shouldn’t let into our country, is no more credible than the idea that Romanians are all vampires – and yes, I spent half my time on this trip in Transylvania.

I know Romania – which is why I know the good things about it. I’ve eaten the food, listened to the folk tales, stroked the cats, walked in the forests and mountains, and spent time with the people. This, however, is not a post about how wonderful Romania is. I’m sure the same is true of every country. When you spend time with people anywhere, when you open yourself to what they have to say, when you want to learn about them, you soon find that – if you don’t start from a position of distrust or fear.

That’s what saddens me so much about what seems to have happened in the UK. We seem to be going backwards, looking inwards, and doing so out of fear. Neville Chamberlain was referring to Czechoslovakia when he talked of ‘a quarrel in a far-away country between people of whom we know nothing’ – but that was back in 1938, and one of the great things that I thought had happened in the intervening years was that we had begun to learn a bit more about people from around the world – and from Eastern Europe in particular. Instead, it seems we don’t just know nothing about people from some of those countries – we know less than nothing, as what we ‘know’ is based on lies, exaggerations, small pieces of ‘information’ taken out of context and twisted into something that may be even worse than lies.

The thing is, by having more people from more places in the UK, we can start to learn more, to open more, and to benefit much more – it’s not a coincidence that there is more tolerance in places where there has been more immigration, and support for UKIP and Brexit is greatest in places with the least immigration. The converse, sadly, is also likely to be true. If we have less immigration, if indeed many of those who have come here decide to leave, then we all lose. We lose opportunities to learn, to broaden our horizons, to find something new.

‘But it’s not about xenophobia, we have legitimate concerns’ will be the response of many Brexiters, and in their own minds I’m sure that’s true – and there are huge concerns in the UK at the moment, from the huge levels of inequality and poverty, the creaking NHS, the strained and dysfunctional housing market, low wages and so forth. Blaming immigration – which easily mutates into blaming immigrants themselves – for these problems, however, is very revealing. The evidence, at least the academic evidence (I won’t use the unfashionable term ‘experts’) is generally against making such an association. Of course I am biased – but I am aware of my bias, at least of its existence. Academics refer to something called ‘confirmation bias’ – broadly speaking, that there is a tendency to seek out and to believe evidence that confirms your own theories, your beliefs (and indeed your prejudices), whilst downplaying or disparaging evidence that opposes it.

As someone in favour of immigration (for all the reasons mentioned above) I am naturally predisposed to evidence that makes immigration seem a positive. I do at least acknowledge that. Why, then, would somebody take the converse position: downplaying, denying or disparaging the evidence that suggests (for example) that ‘health tourism’ is minimal, that immigration does not impact upon employment rates, that has an infinitesimal effect on wages and so forth? That is where my biggest sadness comes. The main reason to choose to believe stories that blame immigration rather than those that point out the positives is that those stories confirm existing prejudices. Confirmation bias in practice… in this case confirming the xenophobia.

That’s where my sadness comes in. We’ll survive Brexit – if nothing else, spending time with Romanians provides a strong and healthy reminder that people can get through awful times, outlast awful governments, and find a way to make the best of it. Right now, Romanian people are protesting against a government that literally wants to stop corruption being a crime – but they’ve lived through dictatorship and come out the other side. We’ll do the same – ‘muddling through’ in British style perhaps. That we have to is sad – and that we’ve chosen to close our minds as well as our borders is even sadder.