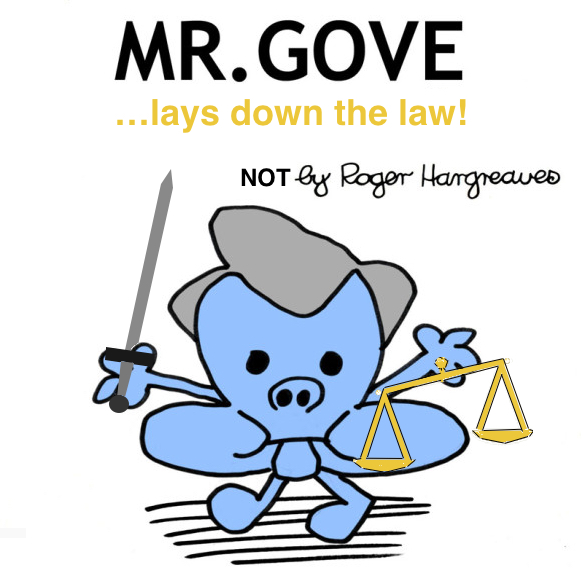 Mr Gove was as surprised as anyone when Mr Cameron won the election.

Still, winning the election made Mr Gove happy, and he was smiling as he went in to see Mr Cameron, looking forward to being given a new job. Mr Gove had not really enjoyed being Chief Whip: it wasn’t nearly as interesting a job as the name suggested. He had particularly disliked being stuck in the toilet when something important happened: it reminded him too much of his school days.

And when Mr Cameron offered him the job of Lord Chancellor, Mr Gove was especially pleased. The robes. The regalia. The history. The law. Magna Carta. Truth. Justice.

It made Mr Gove’s heart sing. 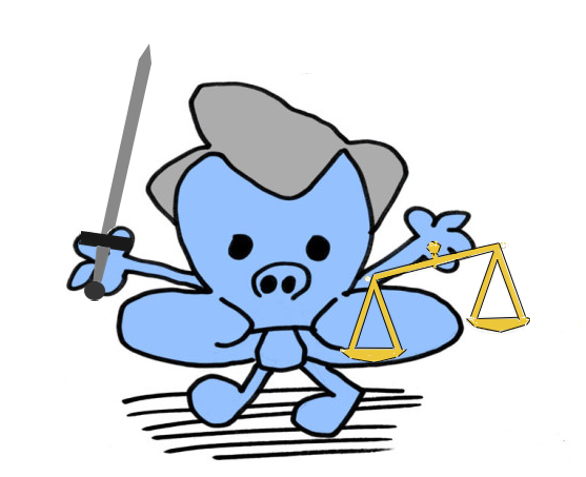 Not that Mr Gove knew very much about law.

That did not matter, Mr Gove knew that. He had known almost nothing about education, and look at what a success he had made of being Secretary of State for Education. And anyway, no-one knew less about law than Mr Failing Grayling had.

He read analyses by civil servants of the devastating impact to access to justice of Mr Failing Grayling’s cuts to criminal legal aid.

He read memoranda about the failings of the privatised court interpreter service, and of how trials had broken down as a result of it.

He read a legal analysis of Mr Failing Grayling’s Social Action, Responsibility and Heroism Act, describing how it was one of the most poorly drafted pieces of legislation in living memory and would have no positive effects whatsoever.

He read communications of many kind about Mr Failing Grayling’s ban on books in prisons.

He read about how even Mr Cameron’s brother had convinced a judge that the cuts had meant an important trial could not go ahead.

He read so much that was Not Right. And Mr Gove started to get angry. Very Angry.

Mr Gove decided it was time to Lay Down The Law. There was so much that was wrong in the Department of Justice. All that he had read had convinced him of that. So much that was Not Right at all.

And Mr Gove knew exactly what to do. He knew what his priorities were. He knew what the real problems were, and what needed to be dealt with right away, as a matter of urgency. He knew. So he turned to his secretary.

“This civil servant began a sentence with ‘however’,” he shouted, jabbing his finger at a memo about access to justice. “This one used the passive voice when he could have used the active,” he cried, holding out a letter about the problems with the privatisation of the probation service. “And there are contractions all over this report,” he went on, pointing out the ‘don’ts, doesn’ts, and can’ts in an analysis of the proposed restrictions to judicial review.

“Someone has even used ‘impact’ as a verb here,” he said in that soft, low voice that his secretary knew was the most menacing of all, as he pushed a report of the problems encountered in drawing up the new British Bill of Rights across the table.

And Mr Gove laid down the law.

Words by me, art by @kaiserofcrisps and me.

For the other episodes of Mr Gove and his friends, click here

The reactions to Jeremy Corbyn managing to get himself onto the ballot for the Labour leadership, scraping in by the skin of his teeth and through the votes of MPs who have made it clear they won’t actually vote for him when the time comes, have been quite remarkable. John Mann MP is reported to have said that it shows Labour’s ‘desire never to win again’, and his words have been matched by a number of other MPs, from Jonathan Reynolds to Rachel Reeves, whilst Dan Hodges has been typically acerbic in the Telegraph, suggesting that Corbyn’s nomination ‘proves the lunatic wing of the Labour Party is still calling the shots’.

They may be right. They may all be right. It may well be that Corbyn’s nomination is a massive step back, taking Labour back to the dark days of the 1980s, to Michael Foot, to the ‘longest suicide note in history’ – but to me the reaction suggests that those reacting need to ask a deeper question: why did Corbyn stand at all? More, why did Corbyn need to stand?

For me, Labour is currently staring into the abyss – but it’s not the ‘old’ and familiar abyss, this is a quite new and qualitatively different abyss.  In the past, it has seemed pretty clear why Labour has lost elections – this time, despite what some commentators seem to suggest, it isn’t quite so clear. Labour’s catastrophic losses in Scotland were not caused by ‘Red’ Ed Miliband being too left wing: regardless of their actual record and indeed their actual policies, the SNP positioned themselves as clearly to the left of Labour, and that was part of their appeal. Labour’s not quite so catastrophic but still pretty devastating failures in England may well have been caused by being seen as economically incompetent – but that’s not the same as by their being seen as too left wing, and in addition isn’t borne out by the reality. Labour’s ‘overspending’ didn’t cause the financial crash…

…but all that is, in a sense, not really the point. The point is that no-one knows for sure what the problem was this time, and that it may well (I would say almost certainly is) be more complex and more nuanced than being ‘too left wing’ or ‘too right wing’. No-one knows. It’s all guesswork – and anyone who suggests otherwise should be listened to only with a huge pinch of salt.  There’s no simple answer – but there are a lot of questions, a lot of issues that need to be discussed, a lot of policies to be thought through – and a lot of debate to have.

That’s the key, for me – and the reason I’m happy that Corbyn got onto the ballot. He won’t win. He knows he won’t win. He’s not ‘the answer’ – and he knows he’s not ‘the answer’. However, without him on the ballot, the big questions weren’t even being asked. Burnham, Cooper and Kendall, despite what the tabloid newspapers say, all come from the same part of the Labour Party – their differences appear to be largely superficial (primarily sex and accent), which means that when questions are raised all the same answers are given and so no debate happens. Austerity is a given. ‘Toughness’ on welfare and on immigration is a given. Defence and foreign policy is fixed and certain.

The result is a sterile debate – and a sterile party. Without debate, without the raising of issues, Labour is lost. I know Labour supporters who in the run-up to the election were attacking the Lib Dems for having betrayed their members in power – and who saw that betrayal as being the reason for the near-total annihilation of the Lib Dems at the polls. Of the many mistakes that Labour could make, a similar betrayal of their members at this stage could well be the worst. Labour MPs need to listen – and to debate the big issues with a more open mind. If they don’t, if they accept the ‘status quo’ as unchallengeable, then they will haemorrhage not just votes but members, and that really is an abyss before them.

Personally, I think there isn’t a candidate on the ballot who can ‘save’ the Labour Party – but I could well be wrong. However, without the kind of proper debate that someone like Corbyn on the ballot could bring about, we may never know. I’d like to tease out what Cooper and Burnham really believe, rather than what their advisers tell them would be most electorally acceptable to say – and a strong, robust and open debate could help that. There might be something there. There might not. Without the debate, we’ll never know – and we need to know. Labour needs a heart as well as a head – more, perhaps, than any other party. Can it find that heart? I don’t know – but I hope we can find out.