There have been two big political U-turns today – even if one of them seems not to be regularly described as a U-turn – and both are good news.

The first is from the Labour Party, who have decided to oppose George Osborne’s so-called ‘Fiscal Charter’ after all, to much distress and derision in much of the media. The second is from the Conservative Party, in their role as the ruling party, who have decided to withdraw from their contract to supply a training programme for Saudi prisons. Despite being described somewhat differently in the media, the two have some striking similarities. 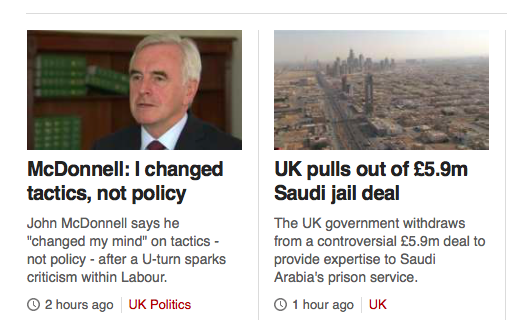 Both are direct changes of heart. Both involve some distress within the parties concerned. The Parliamentary Labour Party meeting at which the new Shadow Chancellor announced his decision was described as ‘a total fucking shambles’, whilst Defence Secretary Philip Hammond is reported to have accused Michael Gove of naïveté in cancelling the Saudi contract, and raised the issue in the National Security Council.

And yet both ‘U-turns’ are good news. In both cases a previous mistake has been corrected, and a better policy decision has been reached. That’s the thing: U-turns are good ideas when a bad decision has been made. And in politics, many bad decisions are made – so very often the dreaded ‘U-turn’ is actually a good idea. Sometimes it’s needed because more information has come to light. Sometimes it’s because circumstances have changed. Sometimes it’s because a new option has emerged. And sometimes, as in both of these cases, it’s because the original decision was a very bad one. In Labour’s case, John McDonnell may well simply not have understood the nature of Osborne’s trap – Labour has a long history of falling into the traps set for it, sadly, partly through the kind of naïveté that Philip Hammond apparently accused Michael Gove of, and partly because the Tories have been very good at setting traps from which there is no obvious escape. Here, though, John McDonnell had a way out, and, eventually, clumsily and shambolically, he took it. Some have said his change of heart came after talking to the people about to lose their jobs in Redcar, but in the end it doesn’t matter. What matters is that he has changed his mind, and been strong enough to do the necessary U-turn.

Gove’s U-turn is equally admirable – and I say that as someone who has been far from a fan of Gove (!) over the last few years. In his case, the change of mind may have been prompted by the public outcry, the balance tipped by Jeremy Corbyn, or some other reason – or it may just have been that he is more of a decent, principled man that his predecessor Chris Grayling or his cabinet colleague Philip Hammond.  Again, in the end, it does not matter – what matters is that Gove, too, has been brave and strong enough to do the necessary U-turn.

And that is the point. It takes guts to do a U-turn: the easy option is to be stubborn, to be seen to be ‘strong’ and ‘consistent’. It takes more strength to dare to change. Now neither McDonnell nor Gove have gone quite that far – neither of them is admitting that this really is a U-turn, that the previous policy – their previous policy – was wrong. It would be great if they could, but the media attitude to U-turns is so poisonous that admitting them is too difficult. If only that were not the case, we might have far better government. If politicians could admit to mistakes, admit that their old policies need changing, we would all be better off. I can’t see it happening – but on those rare occasions when the good U-turns happen, we should applaud them and those who make them. So here’s to John McDonnell and Michael Gove. Thanks for the U-turns!